You will notice this story is by Eric Stringer. Eric is one of my more fun personas. To read his interesting bio, please visit https://harveystanbrough.com/my-personas/. 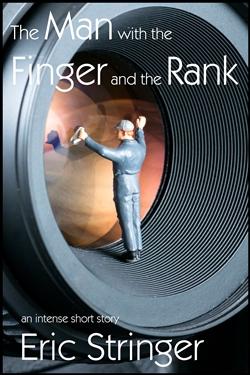 A man with a finger and the rank to use it sat on a cushioned chair at a console.

The others, at their own lesser consoles, were not paying attention. Their reports were filed. Their disbelief that the time had finally come was set aside. Barely. Anticipation filled their every pore, the space between their anxious eyes, the dead air at the entrance to their ears.

All eyes were on him.

He nodded magnanimously, as if granting a prayer. He raised his finger above his shoulder and crooked it into an arch, like a missile bound for Earth.

A banging came on the thick steel door.

He paid no mind. The door was locked and barred.

The finger held the same arc as it descended, then hovered over a plain red button.

History. This would make history.

The finger traversed the final space.

He pressed the button.

And outside the building the placid, pastoral sky came to life. It jumped, seethed and sizzled. Vapor and debris exploded angrily and rumbled away across multiple launch sites.

Deer and cattle came to attention and stampeded away.

Small animals scurried into burrows or ducked into briars.

Birds veered sharply or tumbled before the shock waves.

Outside the bunker door the pounding stopped.

The pleas whimpered away to disbelief.

Across the ocean, thin clouds streaked into being.

Dozens at once and dozens more, as if by some horrible magic. They stretched, straining east to west, then flung themselves away to the north, the south and every half-direction. Tentacles pinpointing the paths of missiles.

How were so many planes in the air at once?

There were no flashing lights.

No but look at the contrails. They must be way up there.

But why so many? And why all at once?

Until the sky began to empty.

Around military installations, the smiles turned to disbelief, the disbelief to screams.

The Army’s forts—Benning, Ord, Bliss and the rest. Redstone Arsenal.

All the strategic Air Force bases.

All the Naval Air Stations.

The docks and ships at San Francisco, San Diego.

Any “defensive capability,” anything carefully counted and inventoried. All were laid to waste.

Husbands and wives, fathers and mothers, sons and daughters, brothers and sisters.

All carefully counted, trained, and inventoried.

The man with the finger leaned back, crossed his arms. He watched screens, scrutinized scopes. Someone brought coffee. He lit a cigarette. Waited.

He returned his attention to the screens, to the scopes.

Nothing incoming. Nothing in the sky.

He tapped his watch, looked again.

It read the same. He grinned. “All right then. Coffee. And sweeten it, would you? Perhaps a touch of Jameson’s.”

Smiles crept out, burst into laughter. Back slaps all around.

Not everyone was vaporized, nor everyone killed.

Here a father, his left foot, leg, torso, arm, neck and face blistered into boils, his eyes wide in disbelief, limped through the house. Past the huddled mass in the corner that used to be his wife. Through the stench of his own charred body into the nursery. His daughter, still in the crib, smiling a baby smile and reaching for the unreachable mobile dangling above her.

There a mother, her long hair burned to tight, curly, powdering wisps, her eyes gone manic, hugged her son’s charcoal body close. She rocked him, rocked him, humming her favorite song, her eyes closed tightly. She didn’t notice when his arm dropped off. A shower filled her mind. A cool shower would make them both better.

Here a grandson, so happy his grandfather had made time to fly in from Nebraska for a visit, searched for him, yelling. Found him. Turned away screaming from the old man’s flat form, pressed beyond his bones, melded to the exterior adobe wall.

There a child alone, the muscles of her burned back exposed beneath a wide flap of skin, raced down the street, her arms raised for someone, anyone, to pick her up.

The same scenes, dozens of times, hundreds of times, played in select locations across the nation.

News reports filtered into the population centers without military installations.

A military strike, they said. Nothing to worry about. Only a military strike. It was surgical, or practically so. Give to your local Red Cross. Send canned goods, clothing, toothbrushes.

Phase Two. Punishment. (What else could it be called?)

The cushion on the chair at the console breathed a sigh of regret as the man with the finger and the rank resumed his seat.

He looked about at his still-smiling colleagues.

Ignored the banging on the door. It was only in his mind. They were all in hidey holes by now.

He held up the finger for his audience. Caused it to arch again like a missile. Directed its descent again to a plain red button. The finger alit. He pressed the button.

Toronto, Quebec for good measure. Cleaning up would keep them busy.

Three hours passed, each more loudly, more jovially, than the hour before.

Stage One was over. Phases One and Two delivered. Completed. Unanswered.

Retaliation would not be forthcoming. All that remained was the battle on the ground.

It would be protracted, no doubt. An unwillingness to launch retaliatory strikes was one thing. Foreign boots treading across the homeland would be something else altogether. There would be fierce resistance, but it would be worth the cost.

Insurgents would be sought out, found, delivered to their heavenly reward.

A reunion of souls with the Great Unconsciousness.

Whatever. It all smelled of weakness.

The man with the finger and the rank turned on his chair. “The planes are loaded? The men settled aboard?”

“Ha!” a gentleman responded, as had been drilled into him.

What a stupid retort. That will never do. “A simple yes is fine.”

“Then yes. And anxious to carry out your will, Commander.”

The man with the finger and the rank nodded. “See to it.”

The other man gave the order, and planes lifted into the sky. But gracefully, with none of the drama of four and eight hours earlier. Sleek silver angels aloft to spread the growing news.

A quarter. Had someone found a quarter in a hidey hole? Only a quarter could make a sound like that, at once so sharp and so quiet.

The man with the finger and the rank—the commander—turned away. To no one in particular he said, “The cameras are all attached?”

Someone said, “To planes and personnel.”

“Bring them up.” He tuned a dial on his monitor, and the inside of a transport plane came into view. The faces of men in full battle gear, seated on cargo nets slung along the side opposite of the camera he’d picked up.

He tuned the dial again and the view switched to the other side of the aircraft. As that soldier turned his head to speak to the one next to him, across the way a soldier displayed a knowing smile and waved. The one whose view he’d seen a moment ago.

How had the soldier known he was looking through his camera?

“I wish to see only the view of the commander in each aircraft.”

A man rushed to his side. Quietly, he said, “Press the 1, Commander, remember?”

The man with the finger and the rank pressed the small button marked 1 on the base of the monitor.

The other man reached past his shoulder. More loudly, he said, “Yes, sir. I do remember the instruction you gave me.” It would make the others believe he was receiving instruction rather than providing it.

He pointed. “I remember, sir, this dial is to select the aircraft. We move from one to the other with each click. A 360 degree dial with the numbers halved. We can select all 720 aircraft with that one dial.

“The number 1 button is the commander’s view of the aircraft. The number 2 button switches to the nose camera of the plane. The 3 is the belly, the 4 the tail. And this other dial, as you already have illustrated, moves from one personnel camera to another within the same aircraft.”

The man with the finger and the rank nodded slightly. “That is correct.” More quietly, he said, “Thank you.”

It was a complex system. After the attack, when the world had calmed and accepted him as Supreme Commander, he would undertake to have a simpler system designed.

Seven hundred and twenty planes in forty-eight flights of fifteen planes each. The men in the first four flights would deploy by parachute at the military installations first for mop-up. When the military was demolished, the rest would deploy to establish martial law and set up a provisional government.

The world was his.

A gentle tapping came at the thick steel door behind him. “Mr. Kristen?”

What do they want? What can they possibly want? Don’t they see what I’ve given them?

To nobody he said, “Tell the nuisances to go away.”

He reached for the dials on the monitor, but frowned.

Which was used to select planes? Which cameras do the buttons control? These things are important.

Important. These things are so very important.

The tapping came again. “Mr. Kristen, let us in.”

He stared at the monitor again, reached for it, but it wavered, faded, became the blue dial on a clock radio.

The gentle tapping came on the door again. Then a slightly louder knock. It was accompanied by a quiet murmuring.

He closed his eyes tightly. No. Not now. Don’t bother me now.

There. He had it back.

Before him was a console. There were 48 buttons on the console, each numbered consecutively. One per flight.

No, the red button has to come first.

Before him was a console. On it was a lone red button. With a cage around it. A cage for safety.  That’s what it needed.

There was a soft click behind him and the door opened slightly. But it squealed, albeit quietly, on the hinges.

The man with the finger and the rank turned slightly, looked in the direction of the door. “There you are at last,” he said and turned quickly back. He reached past his side and crooked a finger to a trusted colleague.

He nodded. “They are loyal?”

“They yearn for the chance. Roll up your sleeve please.”

He reached for the cuff of his pajama top, pushed it high up on his arm. “They can be trusted?”

“Master? Didn’t we settle on this? Am I not the commander?”

From her pocket she took a syringe.

The man with the finger and the rank looked about. The others were gathered in a semicircle around him. Behind him.

He looked at the woman, crooked his finger close to his chest.

He whispered, “The others. Why are they not at their stations? We must act now.”

The men behind him watched closely.

“Ah.” He wavered. “Yes, yes. The Americans, they are weak. Perhaps today—” He paused. “Please lock and bar the door. The time has come.”

“Yes, Commander. But first perhaps you should rest.”

“Rest?” He leaned back in his chair. It was soft and he floated into it. It became a bed. “Yes. Perhaps some rest. Perhaps a little rest.”

But it faded. It all faded.